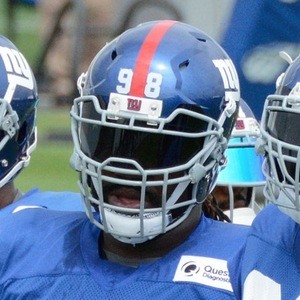 American professional football player known for his work as a nose tackle for the New York Giants of the National Football League. He is recognized for leading the league in run-stop percentage between the years of 2013 and 2016.

He began his athletic career playing basketball at Lake Charles Boston High School. As a shooting guard, he injured his meniscus and chose to play football his senior year instead. He dropped out of Northwest Mississippi Community College to work as a night stocker at Walmart before being recruited to William Penn University. After a successful college career, he was signed by the New York Jets as a free agent in April of 2012. He then signed with the New York Giants in March of 2016.

He was listed on the NFL's Top 100 Players list in 2017. He was also selected as Lake Charles Boston's Offensive MVP and Defensive MVP in the same season.

He was born and raised in New Iberia, Louisiana. He married in July of 2016 and has four children, a son and three daughters.

He played alongside Alex Tanney, Davis Webb, and Eli Manning on the New York Giants during their 2017 season.

Damon Harrison Is A Member Of