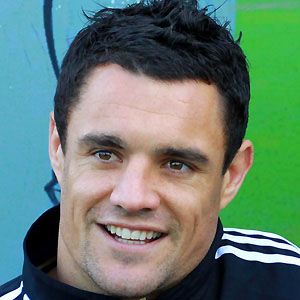 Rugby star known as one of the greatest players to play the fly-half position for teams such as Canterbury, Crusaders, Perpignan and Racing 92. In 2018 he joined the Kobelco Steelers.

He began playing rugby at age 5.

He won the 2011 Rugby World Cup playing for the All Blacks.

He married field hockey player Honor Carter in 2011. They have sons named Marco, Fox and Rocco.

He became the highest point scorer of all time on November 27, 2010, beating Jonny Wilkinson's record of 1,178.

Dan Carter Is A Member Of