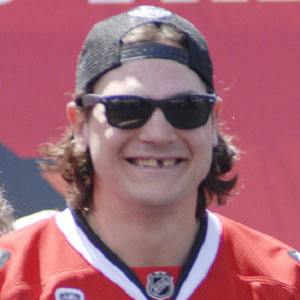 Left winger who has appeared in the Stanley Cup Final as a member of the Philadelphia Flyers and New York Rangers. He has been a frequently-suspended player since entering the NHL and has earned the nickname "Car Bomb" for his fiery, aggressive on-ice demeanor.

He was born in King City, Ontario and began playing for the Milton Merchants in the Ontario Junior Hockey League in 2001.

He began hosting a music radio show called The Bomb Shelter on Chicago's WGN Radio 720 in 2011.

He married Ela Bulawa, with whom he has a son.

He made the 2014 Stanley Cup Final with the help of Rangers goaltender Henrik Lundqvist.

Daniel Carcillo Is A Member Of