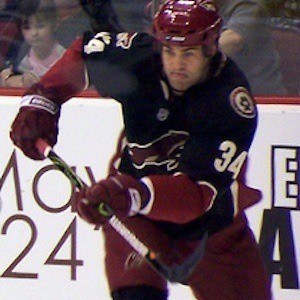 Canadian ice hockey forward known for his defensive and physical play. He was drafted by the Phoenix Coyotes in the ninth round of the 2004 NHL Draft, but didn't make his debut with the team until 2007. He signed a two-year deal with the Toronto Maple Leafs prior to the 2015 season.

He was drafted while still playing hockey at the University of New Hampshire. In his sophomore and junior seasons, he put up a total of 81 points in 81 games.

Between his last season with the Coyotes in 2009-2010 and his two year deal with the Maple Leafs in 2015, he was traded twice and played for five different teams.

He has an older brother who played college hockey at Ferris State University. He married his wife Taylor in 2015.

His first coach in the NHL was hockey legend Wayne Gretzky.

Daniel Winnik Is A Member Of