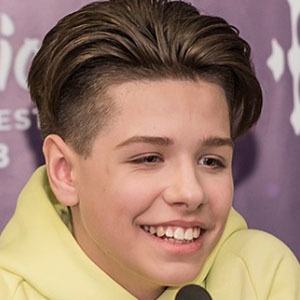 Singer known for having represented Belarus at the 2018 Junior Eurovision Song Content. He is known for his hit single "Time" which was partially composed by fellow artist Kirill Good.

He first started taking singing lessons at the age of six. After performing at several venues throughout Belarus, he gained attention in 2018 when he entered the Eurovision song contest.

He is also known for having represented Belarus at the 2017 New Wave Junior singing competition series as well.

While he was born in Cincinnatti, Ohio, he moved to Belarus at a young age. He shared a photo with his mom to his Instagram account in October 2019.

Daniel Yastremski Is A Member Of