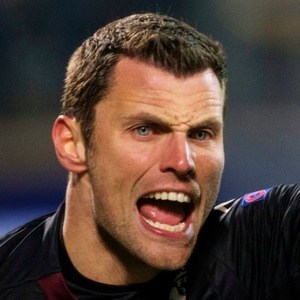 His youth career first began in 2001 as part of the Lecco club and the following year he moved to the Como youth team. He made his senior career debut with the Como club in 2003 and moved to Sampdoria the following season. He was loaned to a range of different clubs the following years and began playing with Inter Milan FC during their 2017 season.

He is known for having been called up to Italy's national team for the first time on August 30, 2014 in a friendly against the Netherlands national team. He also played in the 2016 Euro qualifying match against Norway in September of 2014.

He was born and raised in Lecco, Italy. He married Claudia Fior and together they have a son named Diego.

Italian national team coach Antonio Conte was the first to call him up to play professionally for the squad.

Daniele Padelli Is A Member Of