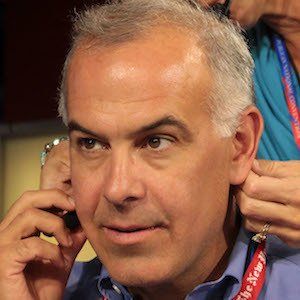 Conservative political columnist for the New York Times. He also wrote for the Wall Street Journal and the Washington Times and provided political commentary for National Public Radio (NPR) and the PBS NewsHour.

In 1983, he graduated with a degree in history from the University of Chicago.

Despite his conservative views, he adopted a liberal stance on same-sex marriage, voicing his support for the practice in the first years of the twenty-first century.

In 1986, he married Jane Hughes, who subsequently converted to his Jewish faith and changed her name to Sarah Brooks. The marriage produced three children.

He supported John McCain during the Senator's 2008 bid for the American presidency.

David Brooks Is A Member Of