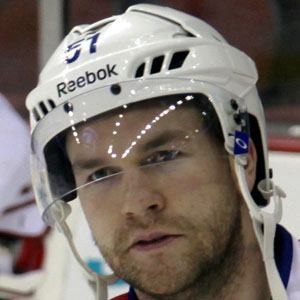 Hockey centre who signed a four-year, $14 million extension with the Montreal Canadiens in 2013. He was previously a standout player for the Chicoutimi Sagueneens, where he won three Frank J. Selke Memorial Trophies.

He was born in Quebec and began his career with the Sagueneens in the Quebec Major Junior Hockey League in 2003.

He was named Rookie of the Year and Most Valuable Player of the East Coast Hockey League while playing for the Cincinnati Cyclones.

He has been in a relationship with Cynthia Desrosiers.

He has been teammates in Montreal with Alex Galchenyuk.

David Desharnais Is A Member Of