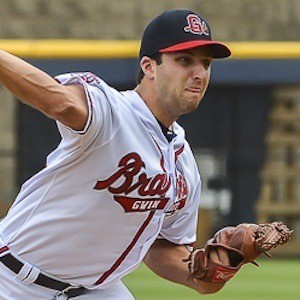 Professional baseball player known for his stints with the Colorado Rockies and Atlanta Braves. He appeared in 39 games for the Braves as a reliever, and 6 as a starter during the 2014 season.

He played baseball at The Walker School in Marietta, Georgia. He was then recruited to play baseball at Princeton University for the Tigers' baseball team. He eventually graduated with an economics degree.

He was taken by the Braves in the third round of the 2009 MLB draft. He was still a junior at Princeton at the time. Following the 2014 season, the Braves traded him to the Colorado Rockies. He began the 2015 season in the minor leagues, but was recalled to the majors on June 2nd.

He was born and raised in Marietta, Georgia. On November 14th, 2015, he married his high school girlfriend.

While a member of the 2014 Atlanta Braves team, his manager was Fredi Gonzalez.

David Hale Is A Member Of