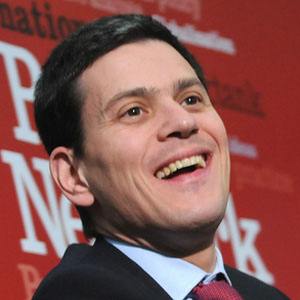 English politician who served as a Labour Party Member of Parliament from 2001 until 2013. During part of his parliamentary term, he also served as Secretary of State for Foreign and Commonwealth Affairs.

After graduating from Corpus Christi College, Oxford, he earned a graduate degree in political science from the Massachusetts Institute of Technology.

He became British Environmental Secretary of State in 2006.

The sons of Jewish Marxist theorist Ralph Miliband and Polish Holocaust survivor Marion Kozak, he and his brother (and fellow politician), Ed Miliband, were raised in London, England.

In the late 1990s and early 2000s, he served as lead policy advisor to Prime Minister Tony Blair.

David Miliband Is A Member Of