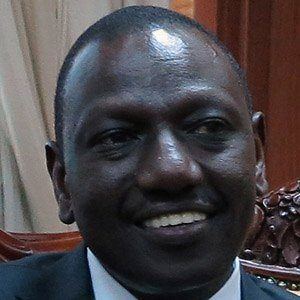 Affiliated at different points in his career with the United Republican Party, the Kenya African National Union, the Orange Democratic Movement, and the Jubilee Alliance, this Kenyan politician took office in 2013 as his country's first Deputy President.

He graduated from the University of Nairobi with degrees in zoology, botany, and environmental science. He began his political career as an organizer of the Youth for Kanu '92 movement.

He served in the Kenyan Parliament from 1997 until 2013. His previous positions include Minister of Home Affairs, Minister of Agriculture, and Minster for Higher Education.

His marriage to Rachel Chebet resulted in six children.

He served as Kenya's Deputy President during the presidential administration of Uhuru Kenyatta.

William Ruto Is A Member Of