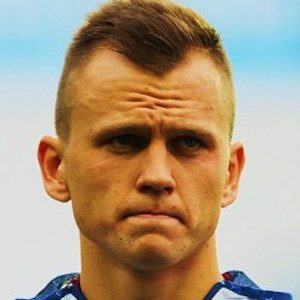 Professional soccer player who is best known as playing left wing for Spanish club Real Madrid. As an International player, he made his debut for his home country Russia in 2012.

He began his youth career in 1996 with the Spanish club Sporting de Gijón. He eventually joined Real Madrid's youth program in 2002, and competed for their junior teams until 2009.

He made his professional debut as a member of the Russian National Team in a World Cup-qualifying game in 2013. He was eventually called up to a provisional 25-man squad for the 2014 World Cup, though not ultimately chosen for the final roster. He made the final roster for the 2015-2016 Real Madrid squad as only 1 of 4 players to have come up through their Youth System.

He was born and raised in the former Soviet Union. His father, Dmitri Cheryshev, was also a professional soccer player.

He has shared time on the pitch with Sergio Ramos as teammates on Real Madrid.

Denis Cheryshev Is A Member Of