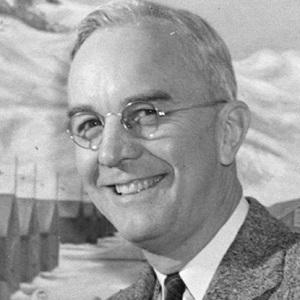 During the 1940s, this high-ranking and controversial federal government employee headed both the War Relocation Authority and the United States Housing Authority. He later served as President of the Institute of Inter-American Affairs and as Commissioner of the Bureau of Indian Affairs.

After earning an undergraduate education degree from Ohio State University and a master's degree in the same subject from New York's Columbia University, he accepted a teaching position at the University of Kentucky. In the early 1930s, he began working for the federal Department of Agriculture.

His actions as head of the Bureau of Indian Affairs were met with harsh criticism from numerous organizations, including the American Civil Liberties Union; the National Congress of American Indians; the NAACP; and the American Bar Association.

He was born and raised in Hebron, Ohio.

Despite the controversy that surrounded his management of several federal bureaus, Myer was honored by President Harry S. Truman with the prestigious Medal for Merit.

Dillon S Myer Is A Member Of