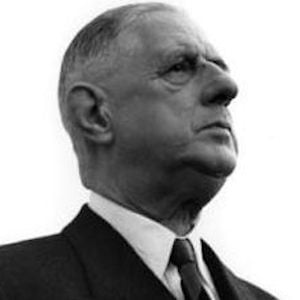 Leader of the World War II-era French Free Forces who led a government in exile against France's pro-German Vichy government from London and Africa. After the war he founded and was the first president of the French Fifth Republic from 1959 to 1969.

He was a voracious reader during his childhood years, and he wrote a one-act play during his teens.

He married Yvonne Charlotte Anne Marie Vendroux in April of 1921. Together, the couple had three children.

He was succeeded by Georges Pompidou.

Charles de Gaulle Is A Member Of