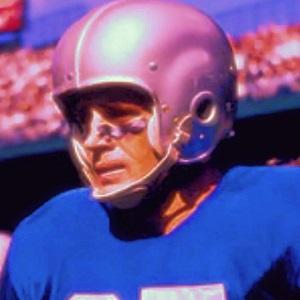 Star college football halfback, kicker and punter at Southern Methodist University in the 1940s who went on to become a 5-time Pro Bowl selection for the NFL's Detroit Lions from 1950 to 1955. The NCAA award for the top RB was named in his honor. The Lions retired his #37 jersey and he was inducted into the Pro Football Hall of Fame in 1986.

He was a multi-sport star at Highland Park High School in University Park, Texas.

Amongst the many accolades and honors he earned at SMU were the 1948 Heisman Trophy, the 1947 Maxwell Award and two Cotton Bowl Classic MVP Awards.

He married his high school sweetheart and the couple had four children together.

He and quarterback Bobby Layne were teammates at Highland Park High School and with the Detroit Lions.

Doak Walker Is A Member Of