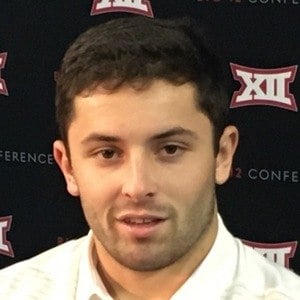 2017 Heisman Trophy winner for the University of Oklahoma who was also a finalist for the award the previous year. He was selected first overall in the 2018 NFL Draft by the Cleveland Browns.

He was a walk-on with the Texas Tech Red Raiders before transferring to Oklahoma following alleged issues with scholarship and poor communication with coaches.

He became the first walk-on true freshman to start a season opener for a BCS school. He helped lead his Sooners to the semifinals of the college football playoff in 2015-16 and 2017-18.

He was born in Austin, Texas to parents James and Gina Mayfield. He got engaged to Emily Wilkinson in 2018. They tied the knot in 2019.

He was coached by Bob Stoops while at Oklahoma.

Baker Mayfield Is A Member Of