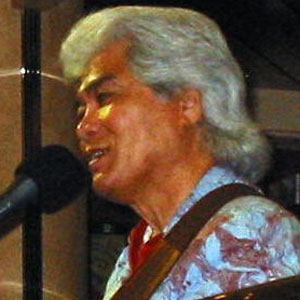 Best known for theme song Tiny Bubbles. He was a Hawaii-based entertainer whose music helped bring his island's culture to mainstream America.

He was a 1949 graduate of the Kamehameha Schools. He played football at Springfield College on a scholarship.

He appeared on I Dream of Jeannie, The Brady Bunch, Sanford and Son, Batman, Charlie's Angels, McCloud, and had his own weekday morning ABC TV series from October 1976 until March 1977.

He married Melva May Kolokea Wong, his high school sweetheart, on November 21, 1951, with whom he had six children. He married Haumea Hebenstreit on September 12, 2006, following Melva May's 1999 death.

He and Dick Dale both sang for Aloha, Scooby-Doo!, the 2005 direct-to-video animated movie based on the long-running TV series.

Don Ho Is A Member Of