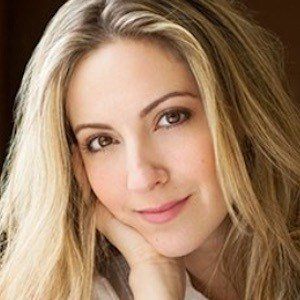 Stage actress who is known for her run as Elphaba in the musical Wicked, where she served as a Broadway stand-by from 2011 to 2013. She also played the part in the 1st national tour of the show between 2008 and 2010.

She gained prominence in 1987 as a member of the cast of the Original Broadway cast of Les Miserables as the young Cosette. She would subsequently attend and graduate from Barnard College of Columbia University.

Her Broadway credits include Martin Short: Fame Becomes Me, Saturday Night Fever, and Hairspray. She also appeared in the national tour of Hairspray as Shelley from 2003 to 2004.

She was born and raised in Fair Lawn, New Jersey.

During her time as the standby for Elphaba in Wicked, she was able to perform alongside Katie Rose Clarke, who played Glinda.

Donna Vivino Is A Member Of