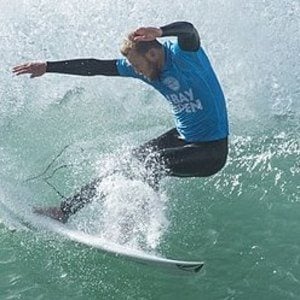 Professional surfer who is known for competing in a variety of events throughout the World Surf League including the Billabong Pipe Masters and the Vans World Cup through his Volcom sponsorship. He is known for sharing photos and videos of his surfing to Instagram and with his over 90,000 followers as well.

Growing up on the Island of Maui, he began surfing at a young age. After competing in several amateur runs, he started competing in the Men's Championship Tour in 2010 placing 9th in his first competition.

In January of 2018, while competing in the Backdoor competition, he wiped out and hit a reef, leaving him underwater for five consecutive waves. He suffered a fractured skull and a broken jaw. His story was featured in Stab Magazine, Surfline, and Surfer Magazine which have all contributed to his go fund me campaign.

He was born and raised in Lahaina, Maui. He posted a picture with his dad and brother to Instagram in June of 2016.

He posted a picture golfing with Garrett Hilbert and Wesley Bryan at the Kapalua Plantation Course to his Instagram in January of 2018.

Dusty Payne Is A Member Of