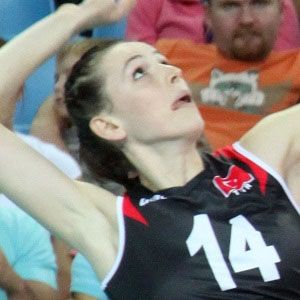 Turkish volleyball player who as excelled as a middle blocker for the Turkish national team, taking home medals in the Women's European Volleyball League in 2009, 2010 and 2011. She has also won numerous league titles with Fenerbahce Acibadem and was named the MVP of the Turkish Supercup in 2009.

She was born in Istanbul, Turkey and began playing club volleyball for Besiktaş in 2004.

She is known for her versatility, receiving awards for Best Blocker, Best Server and Best Spiker in 2010.

She and American Logan Tom have both played for Fenerbahce Acibadem.

Eda Erdem Dundar Is A Member Of