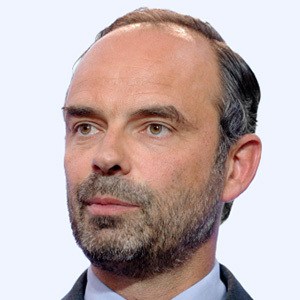 French politician who climbed the ladder to become the Prime Minister of France in 2017. He was a member of the National Assembly representing the 7th constituency of Seine-Maritime from 2012 to 2017.

He worked as an artillery officer during his national service in 1994.

He was previously the Mayor of Le Havre and President of the Agglomeration community of Le Havre.

He married Edith Chabre in 2002 and they have 3 children together. His parents Patrick and Anne-Marie were teachers.

He served as Prime Minister under French President Emmanuel Macron.

Edouard Philippe Is A Member Of