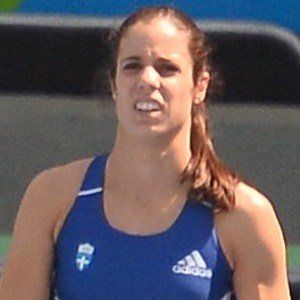 Greek pole vaulter recognized for representing her home nation in the 2012 and 2016 Summer Olympics. At the 2016 Rio Olympics, she took the gold medal in pole vaulting.

She began her junior pole vaulting career in 2005 and earned her first success by winning gold at the Marrakesh World Youth Championships.

In 2016, she won the gold at the European Championships in Amsterdam.

Both of her parents, Georgios Stefanidis and Zoi Vareli, were competitive athletes. They competed in the triple jump and sprint respectively. Her younger sister, Georgia, and husband, Mitchell Krier, were also competitive pole vaulters.

Both she and Yelena Isinbayeva are Olympic gold medalists in pole vaulting.

Ekaterini Stefanidi Is A Member Of