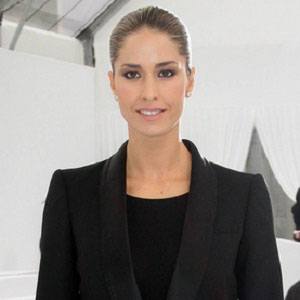 Notable for her cover modeling work for Maxim-Italy and for her runaway work for Emporio Armani and Laura Biagiotti, she is also known for her acting work in films such as Vita Smeralda (2006) and Baciato Dalla Fortuna (2011).

Early in her career, she won the Elite Model Look competition and appeared on the Italian game show L'Eredita.

Also a television personality, she hosted MTV's Total Request Live and was a contestant on the reality series L'Isola dei Famosi. She is extremely popular on social media, with more than 500,000 Twitter followers and over 1.8 million Instagram followers.

A native of Latina, Italy, she is the niece of professional soccer player Ubaldo Righetti. In 2014, she married Bernardo Corradi. She has a son named Giacomo and a daughter named Greta.

She is a contemporary of fellow Italian model Claudia Romani.

Elena Santarelli Is A Member Of