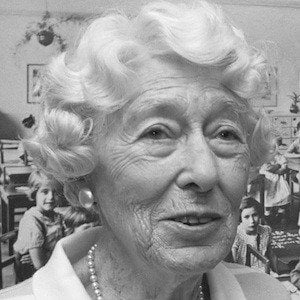 Austrian-born concentration camp survivor who married Otto Frank, the father of famous diarist Anne Frank, after both had lost their children and first spouses in the Holocaust.

Her family lived in hiding in the Netherlands for two years before being captured by the Nazis in 1944 and sent to Auschwitz.

She died in London at the age of ninety-three.

Her first marriage -- to Erich Geiringer -- produced two children, Eva and Heinz. She married Otto Frank in 1953; the couple settled in Switzerland.

Her daughter Eva Schloss -- a childhood friend to Anne Frank and the only one of Geiringer's children to survive the Holocaust -- published a 2013 memoir entitled After Auschwitz: A Story of Heartbreak and Survival by the Stepsister of Anne Frank.

Elfriede Geiringer Is A Member Of

Born In 1905
Born in Austria
Aquarius