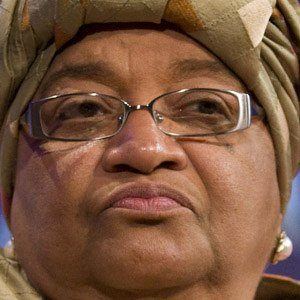 Liberian politician who became the first female to lead an African country when she became the 24th President of Liberia in 2006. She had previously served as the Minister of Finance from 1979 to 1980.

She spent a few years in America studying economics and public policy at Harvard University.

She won the Nobel Prize for Peace in 2011 for her "non-violent struggle for the safety of women and for women’s rights to full participation in peace-building work."

She married James Sirleaf when she was 17 years old, and the couple left Monrovia to study in America in 1961.

She has appeared on Larry King Live to talk about her beliefs.

Ellen Johnson Sirleaf Is A Member Of