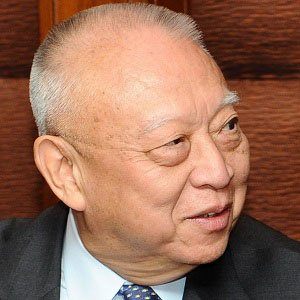 This Hong Kong political leader served as his country's Chief Executive from 1997 until 2005. After resigning from office, he accepted a high-ranking position with the National Committee of the Chinese People's Political Consultive Conference.

After graduating from the University of Liverpool, he entered politics. Soon after taking office as Chief Executive, he faced the Asian Financial Crisis of 1997.

In the first decade of the 21st Century, he founded the China-United States Exchange Foundation.

A native of Shanghai, China, he later settled in Hong Kong. His marriage to Betty Tung resulted in four children: Alan, Andrew, Andy, and Audrey.

Tung Chee-hwa Is A Member Of