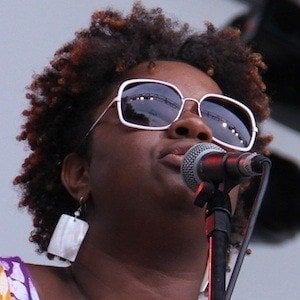 Singer-songwriter and musician who first became known as a member of the bands Pret.utu and Banda Soatá. Then, in 2012, she made her breakthrough as a solo artist by winning the inaugural season of The Voice Brasil.

Interested in music from an early age, she was a part of her local church choir. An actor as well, she studied performing arts at the University of Brasília.

In 2009, she released her debut solo album Peça and would later follow with the self-titled 2013 album Ellen Oléria and the 2016 album Afrofuturista.

Born in Brasília, she was raised in Chaparral. She married Poliana Martins in August 2013.

Competeing on The Voice Brasil, she was a member of Carlinhos Brown's team.

Ellen Oleria Is A Member Of