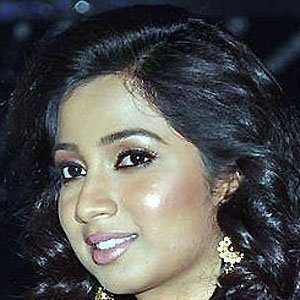 Bollywod playback singer who became a judge on Star Voice Of India-Chhote and The X Factor India. She has also been a mentor on Music Ka Maha Muqqabla.

She rose to fame following her win of the Sa Re Ga Ma Pa, her second win after a childhood special appearance. Her debut film appearance came in 2003 with Saaya.

She has sung for Joyalukkas, the jewelry store, in five different languages.

Her father Biswajeet Ghoshal was a power plant engineer for the Nuclear Power Corporation of India and her mother is a literature post-grad. In 2015, she married Shiladitya Mukhopadhyaya. The couple welcomed a son named Devyaan in May 2021.

Shreya Ghoshal Is A Member Of