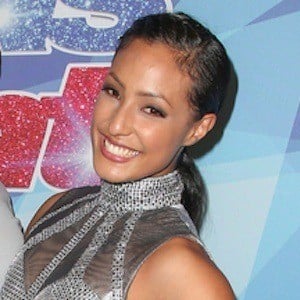 Dancer, choreographer, and actress who is best known for her appearance on season 3 of America's Got Talent where she showcased her skills in salsa dancing.

Working as a choreographer and dancer for a wide variety of television roles, she first began performing on television in the Nickelodeon show Ned's Declassified School Survival Guide in 2007. She has since gone on to earn guest spots in several TV shows including NCIS.

In addition to their performance on season 3 of America's Got Talent, they appeared again on season 12 of the show where they made it to the quarterfinals.

Born and raised in San Francisco, California, she performs her salsa dancing around the world with her brother Junior Alabi as her partner.

As a guest star with a recurring role on the MTV series Teen Wolf, she stars alongside other celebrities including Tyler Posey, Holland Roden, Dylan O'Brien, and Melissa Ponzio.

Emily Alabi Is A Member Of