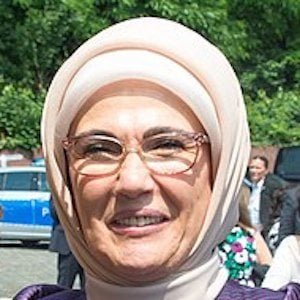 Political figure known for being the First Lady of Turkey as the wife of Recep Tayyip Erdogan. She is also known for her strong stance against child marriage and for her humanitarian work during the floods of Pakistan.

She attended the Mithat Pasa Aksam Art School but left before graduation. She then joined the Idealist Women's Association. During one of her activities with the group, she met Recep Tayyip Erdogan and together they married in February of 1978.

In February of 2011, She was presented with the Prix de la Fondation award by the Crans Montana Forum at a ceremony in Brussels.

She met with fellow First Lady Michelle Obama at the Yellow Oval Room in the White House in December of 2009.

Emine Erdogan Is A Member Of