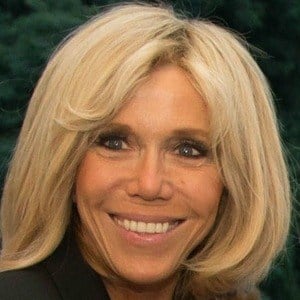 First Lady of France, and the wife of 10th president of the Fifth Republic Emmanuel Macron. She is also a schoolteacher who has taught literature around Paris, France, including at the prestigious Lycée Saint-Louis-de-Gonzague.

Her first major teaching job came in the 1980s at the Collège Lucie-Berger in Strasbourg, France.

She met her husband while teaching him literature and theatre at Lycée la Providence. She is 24 years his senior.

She is the youngest of six children. Her parents are Simone and Jean Trogneux of the chocolaterie of the same name in Amiens, France.

She played an active role in her husband Emmanuel Macron's 2016-2017 presidential campaign, and was a chief strategist.

Brigitte Macron Is A Member Of