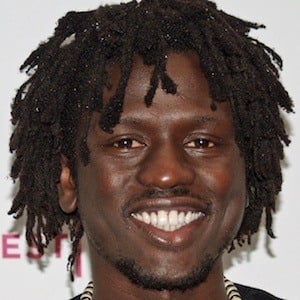 Activist and singer who is known for founding the charity organization Gua Africa. He is particularly known for his work in both the activism and music industries for aiming to end war and poverty in his home region of South Sudan. In 2014, he released his 5th full length studio album The Key.

As a child, he was drafted into being a child soldier in Sudan. He was eventually smuggled out of Ethiopia, where he had been fighting, and adopted by a British aid worker. He subsequently attended school in Nairobi.

He performed live at Nelson Mandela's concert celebration for his 90th birthday. In 2014, he appeared in the film The Good Lie alongside Reese Witherspoon.

He was born in South Sudan, and eventually raised throughout that region and Ethiopia.

He collaborated with Nelly Furtado and Nile Rodgers on his 2014 album The Key.

Emmanuel Jal Is A Member Of