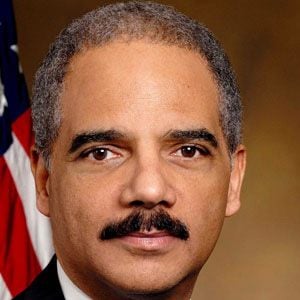 The 82nd Attorney General of the United States, the first African-American to hold that position. In 2011 he notably declared that the Department of Justice would no longer defend cases involving the Defense of Marriage Act in court.

He attended Columbia University, where he was co-captain of the basketball team before joining the U.S. Justice Department's new Public Integrity Section from 1976 to 1988.

In 2011, he was held in contempt of Congress for his involvement in the botched Fast and Furious investigation.

He has three children with his wife, obstetrician Dr. Sharon Malone.

He was named Attorney General by the 44th President of the United States, Barack Obama.

Eric Himpton Holder Jr. Is A Member Of