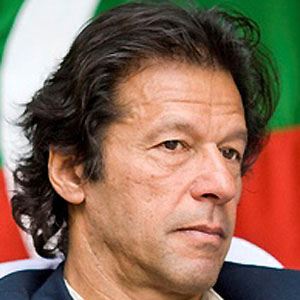 Pakistani politician who founded Pakistan's Tehreek-e-Insaf party and became the 22nd Prime Minister in 2018. He rose to prominence as his country's cricket captain and premier all-rounder, scoring over 3,500 runs and taking more than 350 wickets.

His international cricket career spanned from 1971 to 1992, and he played a key role in Pakistan's 1992 World Cup victory.

He helped his country by founding the Shaukat Khanum Memorial Cancer Hospital & Research Center in 1996.

He was teammates with Wasim Akram while playing for Pakistan.

Imran Khan Is A Member Of