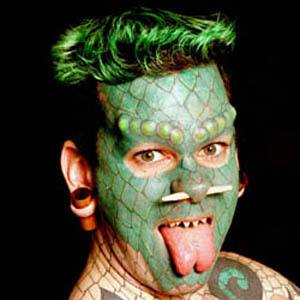 The freak show performer who is most recognized by his stage name The Lizardman.

He was obsessed with tattoos and body modification as a teen and began the process of changing his look when he was only 19.

He has performed all kinds of acts, including fire eating, sword swallowing, laying on a bed of nails, and has also acted as a human dartboard.

He moved to Austin, Texas with his wife Meghan and their pet ferrets.

He has also hosted the Jägermeister Music Tour, with band Slipknot consistently headlining.

Erik Sprague Is A Member Of