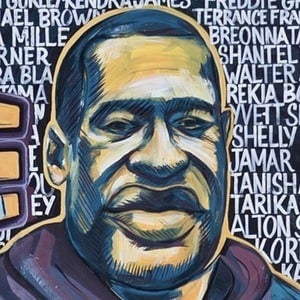 Black American man who tragically died from asphyxia after a Minneapolis police officer named Derek Chauvin kneeled on his neck for over nine minutes. Floyd's death spurred an onset of protests against unfair treatment of Black people throughout the world, primarily in the United States, as part of the Black Lives Matter movement.

He played basketball and football at Yates High School in Houston, Texas.

On the night of his tragic death, he was first apprehended by the police after allegedly using a counterfeit $20 bill at a grocery store.

He was born to George Perry and Larcenia "Cissy" Jones Floyd and raised alongside four siblings. He had five children.

He was close friends with NBA star Stephen Jackson.

George Floyd Is A Member Of