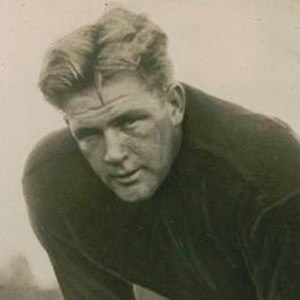 Football Hall of Famer was the all-around offensive and defensive man for the Chicago Cardinals.

He was an All-American at Stanford University and played against Notre Dame's famous Four Horsemen, outgaining them all, combined.

In 1926 alone, in 29 games he played almost every minute, and three years later set an enduring NFL record by scoring all of the Cardinals 40 points (six TDs and four extra points).

He was born in Willow River, Minnesota.

Not limited to just football, he was also a pitcher for the St. Louis Browns baseball team, giving up two of Babe Ruth's record 60 home runs in 1927.

Ernie Nevers Is A Member Of