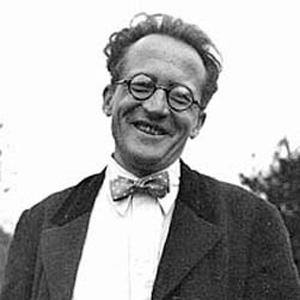 Austrian physicist who is best known for using a cat in a box to explain quantum mechanics. His 1944 book What Is Life? examines issues of genetics.

Reading Arthur Schopenhauer's work got him interested in color theory and philosophy.

In 1933, he was awarded the Nobel Prize in Physics for the Schrodinger equation, commonly referred to as Schrodinger's Cat.

His parents' names were Georgine Emilia Brenda Bauer and Rudolf Schrodinger. He was married to Annemarie Bertel from 1920 until 1961.

Another famous Austrian musician like him is Joseph Haydn.

Erwin Schrodinger Is A Member Of