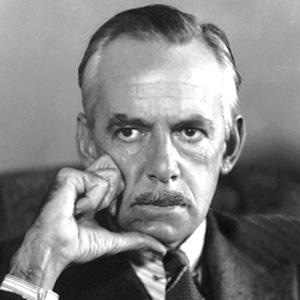 Irish American playwright who received both the Nobel Prize in Literature (1936) and four Pulitzer Prizes for Drama (1920, 1922, 1928, 1957). His most famous dramatic works include Anna Christie, Desire Under the Elms, Strange Interlude, Mourning Becomes Electra, The Iceman Cometh, and Long Day's Journey into Night.

He dropped out of Princeton University and subsequently spent time both at sea and in a sanatorium (where he was treated for tuberculosis). After involving himself with the Provincetown Players theatre troupe in 1916, he won the Pulitzer Prize in Drama for his debut play, Beyond the Horizon, which premiered on Broadway in 1920.

He became known for only one comic play (Ah, Wilderness!); his career as a playwright was marked by dark, highly pessimistic dramas that often painted a grim picture of family dysfunction.

He had two brief marriages-- to Kathleen Jenkins and Agnes Boulton-- before marrying his third wife, , in 1929. His eighteen-year-old daughter, Oona, married the much-older in 1943.

O'Neill and T.S. Eliot both earned the Nobel Prize for Literature.

Eugene O'Neill Is A Member Of