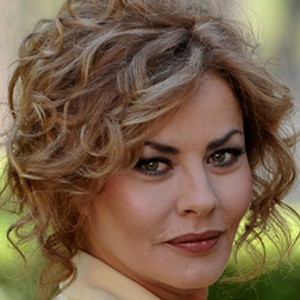 Italian actress and model who is known both for her recurring television roles as well as her feature film appearances. She is best recognized for having portrayed the character Tea in the 1988 film Intimacy as well as Berenice Rondi in the 1991 film Forever.

She started her acting career on television when she made her debut in the popular series Drive In. She gained further attention in 1987 when she started her collaborations with Italian director Federico Fellini.

As a model, she has also been featured on the covers of several magazines including Playmen in April of 1992, Chi in 2000, and Newlook in January of 1996.

She was born and raised in Verona, Italy and joined a civil union with activist Imma Battaglia in May of 2019.

She starred alongside Ben Gazzara and Vera Fischer in the 1991 feature film Forever.

Eva Grimaldi Is A Member Of