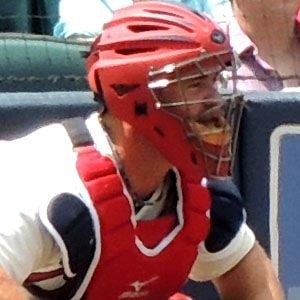 MLB catcher and outfielder who began his career with the Atlanta Braves in 2013. He hit 43 home runs in his two years with the Braves before a 2015 trade sent him to the Houston Astros. He won his first World Series title as a member of the Astros in 2017.

He received a scholarship to Texas A&M University, but a particularly nasty bout with anxiety and substance abuse caused him to lose his aid and he dropped out.

After quitting baseball, before making it in the MLB, his first job was as a parking attendant in Dallas.

He became teammates with fellow catcher Brian McCann in Houston.

Evan Gattis Is A Member Of