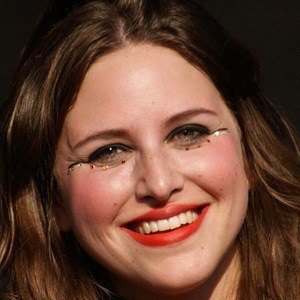 Danish singer-songwriter who became known for her debut album The Black Cat Neighbourhood. She was national radio station DR P3's unavoidable at week 38 with her single "I Lay My Head" in 2009. She won a prestigious P3 Guld Award in 2011.

She grew up dancing and moved to New York for the Broadway Dance Center at 21. She later moved back to Denmark to pursue music.

Her single "Bridges" was the most played track from a home artist on radio station DR P3 in 2010.

She was born Maria Apetri to a Danish mother and a Romanian father who were part of the Balkanic folklore dance group Crihalma and spent her childhood on dancing tours. Her father died when she was 9.

Her song "No Time for Love" written by Bryan Adams and Gretchen Peters was the theme song for the Danish film Simon and Malou.

Fallulah Is A Member Of