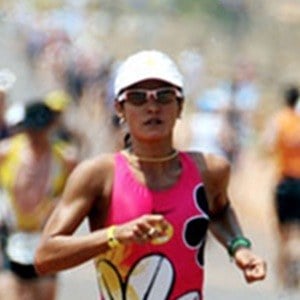 Professional triathlete who is known for being the first ever woman to compete in the Ironman Triathlon World Championships. She has won multiple Ironman Brazil competitions throughout the early and mid 2000's. In 2012, she also founded her own fitness company which sells fitness and casual workout apparel.

She first began competing in triathlons in 1983 while attending University in Rio de Janeiro, Brazil. She turned professional in 1987 and went on to earn her first medal in 1994 at the Ironman World Championships.

She is known for founding the Instituto Fernanda Keller which is a social institution for 700 adolescents. She founded the institution in September of 1998.

She was born and raised in Niteroi, Brazil.

Larissa Fabrini is a fellow triathlete known for competing in Ironman Brazil.

Fernanda Keller Is A Member Of