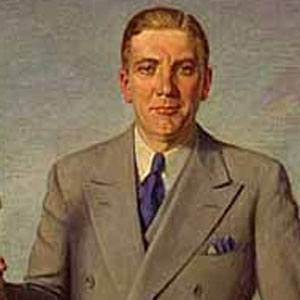 22nd Governor of Minnesota from 1931 to 1936 who was one of the most influential politician of his era. He was the first Governor in the United States to be a member of the Minnesota Farmer-Labor Party.

After earning his law degree he worked in Minneapolis as a country attorney and then entered politics with the Farmer-Labor party.

Entering Minnesota politics when the state was reeling from the Great Depression, he introduced unemployment insurance and a progressive income tax, among his other measures.

He was born in Minneapolis, Minnesota, the son of working Scandinavian immigrants.

From his perspective Franklin D. Roosevelt's New Deal did not go far enough in bringing the country out of the Depression - he called for a government takeover of key industries.

Floyd B. Olson Is A Member Of