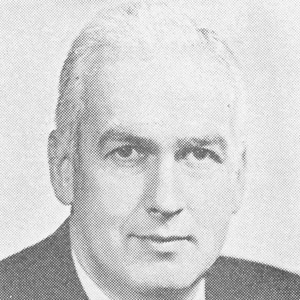 Affiliated with the Democratic Party, this New Jersey politician represented his home state's fourth congressional district in the United States Congress from the mid 1950s through the late 1970s. For several years, he served as Chairman of the Committee on House Administration.

After earning a law degree from Wake Forest University in North Carolina, he served in World War II as a commander in the United States Navy.

As Chair of the House of Representatives' Libraries and Memorials Subcommittee, he was involved in a series of hearings regarding Washington, D.C.'s Smithsonian Institution.

A native of Trenton, New Jersey, he later lived in Alexandria, Virginia and Bethesda, Maryland.

He and fellow New Jersey Democrat Harrison Williams both resigned from Congress as a result of investigations related to the F.B.I.'s late 1970s Abscam corruption investigation. Thompson served a three-year prison sentence as a result of his Abscam bribery charges.

Frank Thompson Is A Member Of