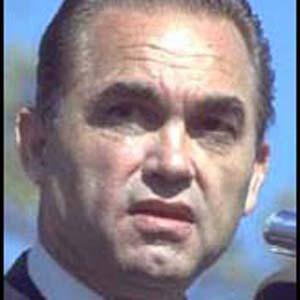 Democrat from Alabama who served his state as it's Governor in the 1960's, 1970's, and 1980s. He ran for President four times and was known for his Southern populist and pro-segregation views.

He was a regional champion for boxing during his high school years.

A few years after a 1972 assassination attempt left him in a wheel chair he apologized to black civil rights leaders for his past actions as a segregationist and became the first governor to appoint two black members in the same cabinet.

He publicly stated that he would run against US president John F. Kennedy for the Democratic nomination for President, but just days later JFK was assassinated.

George Wallace Is A Member Of