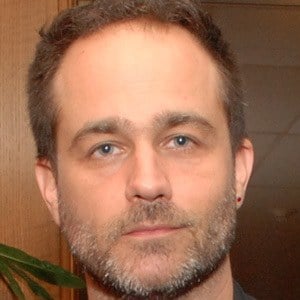 Argentine actor and television host who is known for his work as the host of several Telefe network shows including Humanos en el camino and Ser urbano. He is also known for his recurring television roles including as Martin Trauma from the series Ciega a Citas and as Nicolas from Soy tu Fan.

He started his career as the host of a videoclip television series, but he gained attention as Alejandro on the 1994 teen television series Montana Rusa. His feature film debut as an actor came in 1996 when he starred as Manuel in the film Territorio comanche.

He is also known for being a vegetarian.

His brothers Alan Pauls and Nicolas Pauls are also actors. He has two children names Muna and Nilo.

He starred alongside Lance Henriksen and Robin Givens in the 2003 feature film Antibody.

Gastón Pauls Is A Member Of