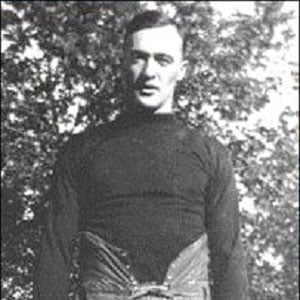 The first Notre Dame football player to be selected as an All-American. He played halfback, quarterback, and punter.

He had never played organized football before college, but legendary coach Knute Rockne convinced him to join the Fighting Irish.

He died during his senior season of a streptococcal throat infection at the age of 25; days before his death, he rallied the team for a win against Northwestern.

He grew up with his dad, Matthew, in Laurium, Michigan.

He was portrayed by actor and future U.S. president Ronald Reagan in the 1940 film Knute Rockne, All American, which popularized Gipp's famous deathbed request to Rockne, Win just one for the Gipper.

George Gipp Is A Member Of