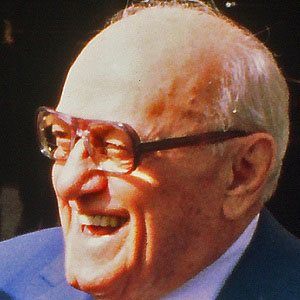 Known as "Mr. Everything" and "Papa Bear," he is best remembered as the founder and long-time owner and coach of the Chicago Bears, whom he helped capture eight NFL Championships from 1921 to 1963. He was also one of the co-founders of the NFL in 1922.

In 1915, he was planning on boarding the doomed riverboat SS Eastland, but he was late and the tardiness ended up saving his life as the ship capsized.

During his playing days, while he was also owner and coach of the Bears, he played both wide receiver and defensive end.

His daughter Virginia Halas McCaskey became majority owner of the Bears after him and her son Michael McCaskey was team president for nearly two decades before Virginia fired him in 1999.

One of the highlights of his playing career occurred in 1923 when he stripped the ball from the great Jim Thorpe and returned it 98 yards for a touchdown. The 98-yard return stood as a league record for nearly 50 years.

George Halas Is A Member Of