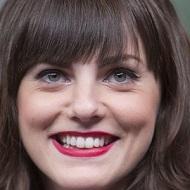 Canadian actress and television and film who played the role of Laurel-Ann Drummond in the 2008 film Pontypool and the role of Sabrina Reynolds in the 2012 television series The L.A. Complex.

She move from England to Canada when she was sixteen and graduated from Havergal College.

She appeared in the role of Skye on an episode of the television series How to Be Indie in 2009.

She was born to David and Frances Reilly. She married actor Mark O'Brien in 2013.

She is the granddaughter of musician Tommy Reilly.

Georgina Reilly Is A Member Of